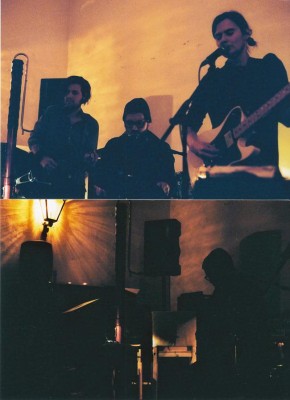 “Desolate, lonely scenarios, like aural Edward Hopper paintings, are
described in songs and poems that float above minimal washes of pale,
haunted guitar chords. This reflective, introspective music
occasionally brings to mind Portishead, Low, and Bjork’s vocal delivery,
but it would be doing Lina Paul a disservice to say it was like
anything much else.” (live unsigned )Lina Paul is joined by Berlin based instrumentalist/ songwriter Andreas Laudwein and Massimiliano Galli an italian musician/songwriter/producer on drums, synth, guitar and vocals.Lina Paul lives in Berlin. During the last two years she played over 100 shows in Germany , Belgium, the Netherlands, Italy, Usa, Denmark, France, Czechia, Austria, England , played and recorded songs for radioplays and for an exhibition at the Groninger Museum (Netherlands).
LP produced two albums, a third one will be released in 2013.

Andreas Laudwein has been traveling the world with his band “The Alma Church Choir” and is currently working on new music to be released in 2013. He is also known for his live work for Miss Kenichi and is a member of Ian Fisher & The Past.

Massimiliano Galli is the leader of italian band “Rumori dal fondo” and member of irish minimal folk band “SignA”. Both project records will be released during 2013.

‹ HERE THERE AND EVERYWHERE COVER

This is my new album as @postprimitive . It's call

Hello everybody, I obviously made a little mess wi

I will stream a bunch of new songs we recorded liv

#Repost @cassandravoices ・・・ Great to see yo